Anybody that is lucky enough to have a doodle dog in their life completely understands their unique character.  A doodle’s character is unlike any dog I have every been lucky enough to parent.  They are one of the most popular dog mixes of this decade.

If you have been following my website, then you know that I currently have a Labradoodle named Fergus.  He is the second Labradoodle that I have had in my life and BOY are they different.

In honor of my love of the Doodle, I wanted to share some insight into just how completely different a dog of the same breed can be.

There is much thought given to the idea that a certain breed of dog carries remarkably similar characteristics within that breed.  Generally, that means that dogs of the same breed are more likely to follow the same type of character of that breed.

Although that is true in a general sense, my experience of raising 2 different Labradoodles has taught me that isn’t completely true.   Yes, dogs of the same breed are likely to share unique characteristics but yet much like children, they are often polar opposites to each other.

Dogs are really no different.   A breed gives us the road map to their genetics and what the breed overview may consist of.   Things like intelligence, appearance, and temperament.   Dog lovers are often in love with a breed simply because of these characteristics.

What I have learnt from my own life, is that really is just a starting point.  A Labradoodle let’s remember is a mixed breed.  It is a mix of a Labrador Retriever and a Poodle.  The reasons for varying characteristics obviously are what level of mix of each breed within each litter of dogs.

For example, my first Labradoodle FINN, was an Australian Labradoodle, which means that both of his parents were Labradoodles.  My second and current dog FERGUS is a first-generation Labradoodle or F1 Labradoodle.  He is the mix of a Labrador with a Standard Poodle.

So even though they are both called Labradoodles, obviously their genetics are not really that similar.

Yes, the DOODLE part is them being a mix, but the mix itself is completely unique.

The look or appearance of the 2 dogs is not even close to the same.  FINN was curly haired, with a very lanky Poodle body. He weighed about 50 lbs. and had hair that didn’t shed at all. 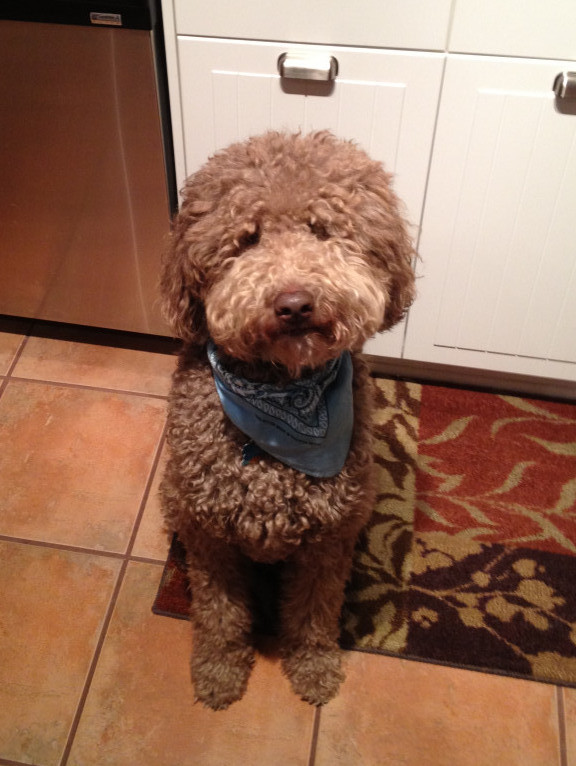 FERGUS on the other hand is stocky, with much shorter legs, with wavy hair and a more Labrador appearance.  He already at 11 months old weighs 68 lbs.  Also, FERGUS does shed a ton. 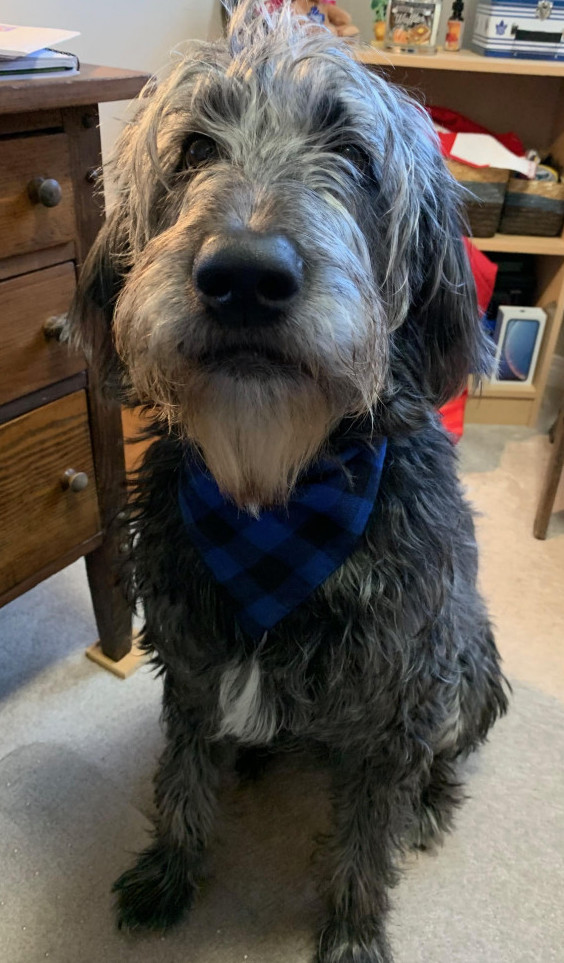 If you looked at them side by side, you wouldn’t even know they were the same breed of dog.  This tells us that in varying degrees, they aren’t the same even though they are YES both Labradoodles.

I think that is what makes people love the breed so much, is that you never really know what you are going to get.  The breeding of the parent’s genetics determines what the mix is and how they end up looking.  I know this sounds simple, but many people often get a Labradoodle because their friend of family has one.  They think that all Doodles are the same and that they know exactly what dog they are getting.

This simply comes from not understanding that you need to know the breakdown of where the puppy comes from.  What are the puppy’s parents?  Are they like FERGUS where his mom was an 80 lb. Chocolate Labrador or like FINN’s Mom who was a 50 lb. Labradoodle?  Do you see the dramatic difference?

Even though I know a lot about the Labradoodle and their different make ups, I never really sat down and thought about what that would mean for the dogs’ character.

FINN had a wonderful character and temperament.  I would say he follows exactly the characteristics that you see when a person describes a Doodle.  He was sweet, gentle and a super affection dog.  Not a tough, mean bone in his body.  Really a “Gentle Giant”.  Even to the point where he would run like a deer, smooth and calmly.

FERGUS on the other hand, is really the polar opposite to that.  I would describe him as a “Bull in a China shop”.  He is a much tougher, rougher, and certainly less sweet or gentle dog.  It is not that I am saying he is aggressive or mean, as he isn’t.  But he is certainly easily described as a true BOY!

What do I mean by that?

Well he doesn’t have a delicate or smooth way in which he moves, or even plays.  He is clunky, stubborn, and extremely independent.

The difference between the 2 is utterly amazing.  I realized that FERGUS would be his own dog, but the clarifying contrast is quite surprising.  FERGUS definitely has the makeup of a Labrador Retriever.  All you need to do is read the description of that breed and he falls directly with that.

This just shows that Doodles although the same are completely unique and different.  Just because they say they are a Doodle, doesn’t mean that you are going to get a dog that has the same characteristics of any other Doodle.

Now I know that breeds that aren’t mixed are more likely to have the same characteristics of each other as their genetics are far purer, hence the term “PUREBRED”.   When it comes to the mixed breed like a Labradoodle, they can be less of one side of the makeup of the breed and more of the other.

Now I know that I have talked a lot about the differences between my 2 Labradoodles, but what about the similarities?  Are there any?

Yes, there sure are!

Both Doodles have things that absolutely show that they are a Doodles. 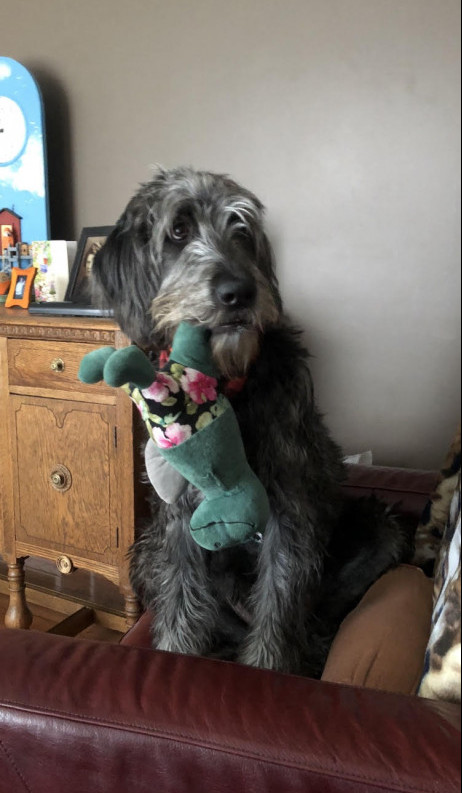 You can see that although appearance and certain personality traits are different, they have many characteristics that define them as a Doodle.  These are the things that people love about having a Doodle.

Both of my Doodles boys are dogs that I loved very much.  FERGUS being my most recent dog, has taught me many things about being a dog parent.  I often think that I know almost everything there is about Doodles, and then just like that FERGUS does something I have never seen before. 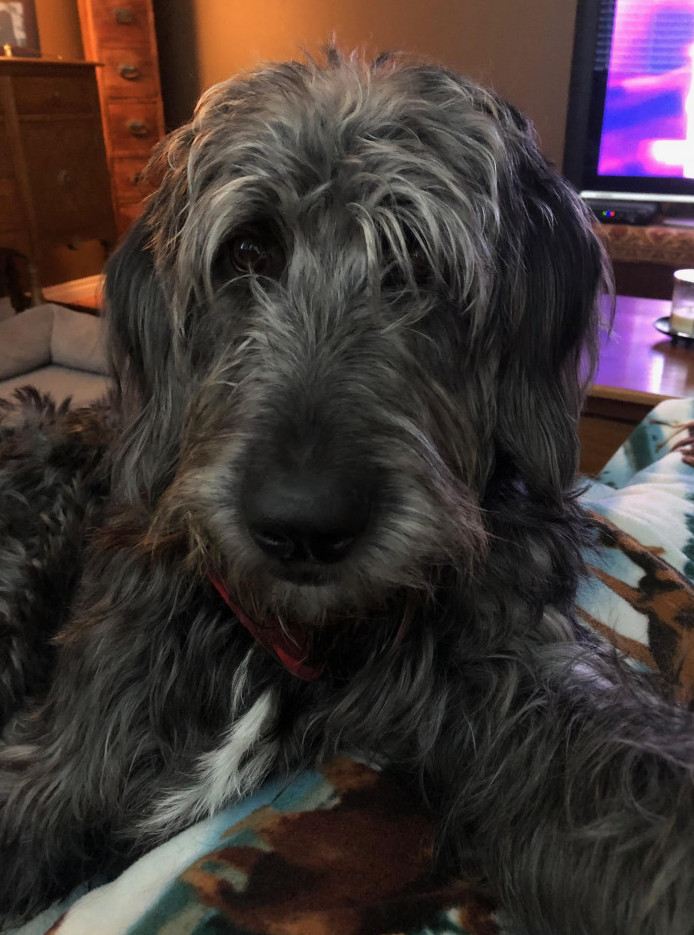 Sometimes though, I wish I could have had them both at the same time.   Sadly I lost my boy FINN in August of 2019, and I miss him everyday!

All of this shows that a Doodle’s character no matter their genetics or who their parents are, is still a Doodle.  They are one of the best breeds of dog around.  Anyone wondering if this is the dog for them, needs to give some thought to getting a Doodle.  You won’t be disappointed.  You maybe surprised, but you will never be disappointed!

I hope you have enjoyed my post and if you have any questions or comments, just drop me a comment below.

Thanks, and HAPPY DOODLING!!

4 thoughts on “A Doodle’s Character”