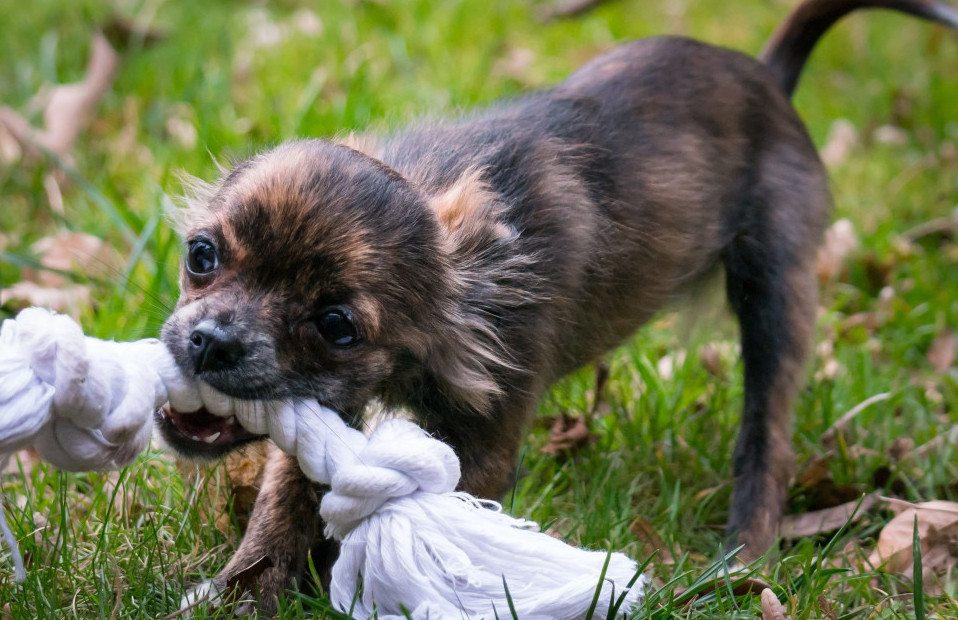 Some people believe that only big dog breeds like to play tug and not smaller dogs.  That is just simply not true. Depending on the dog of course, as every dog has a unique character and plays differently.

It is not like tug of war with a toy and your dog isn’t fun, but why do they love it so much.?  Is it OK to play like that with your dog?   Continue reading to find out the scoop on dogs and tug of war.

Is it a natural instinct

Is the fact that dogs like to play tug of war a natural instinct, or is it a learned behavior?

Dog going back in history, have always helped us by performing jobs like hunting birds and prey.   Grabbing and tugging animals out of their dugouts or hole.  Even the sport of retrieving a hunted bird, anytime a dog needs to carry out this job, there is a natural instinct to shake its prey back and forth in a tugging action.

Animal experts say that this type of behavior is mimicked by using a tug toy in place of the prey.  So basically, it is truly a natural instinct that your dog has.

Playing tug of war, has so many amazing benefits for your dog.  Here is a list of some of the most positives reasons why you should head out and start playing tug today.

Everyone of these benefits stands alone on its own for the positive features it offers you and your dog.  As with any play, exercise or training you do, as the parent you can also learn something about your dogs personality.  Finding out what things they need to work on and what things they have already mastered.  Even though it is meant to be fun, we all know that everything that we do with our dogs is somehow an exercise in behavior.

Never play tug of war if your dog has bad teeth or any dental issues at all.  Making sure your dog doesn’t have any loose teeth or mouth injuries before you start playing.

When it comes to playing tug of war with puppies, it is really not recommended until they are 8-10 months old.  The reason for this is that their teeth and jaws are still developing.  Playing with puppies before they have their permanent teeth can lead to damage.

When playing tug with your dog, there are some very important rules that need to be followed to ensure the game is played safe and properly.

First off, you need to make sure that you are in control of when the game starts and ends.  Your dog is not to grab the toy, until you give them permission to.

Second, make them sit calmly in front of you until you are ready to start the game.   No lunging, fidgeting, or overall lack of focus.   You can use words like OK, take it, get it, or whatever word you want to use.

Third, never let your dog jump on you to grab the toy when you are playing.   You don’t want them to be grabbing at your hands, clothes or anything at all.   This type of behavior can easily cause the game to get out of control.   If this happens, at first, you should yell out in pain, so the dog knows that they have gone to far.  If this doesn’t work, you want to end the game right away.  That way it is teaching them that this behavior is not allowed.   Continuing to play without consequences definitely sends the wrong message to your dog.   You don’t want this behavior to be the way you play this game.  Taking a time out every once in a while is also a great idea, just to slow things down.

When it is time for the game to be over, you need to make the decision and finish the exercise with your dog, so they aren’t waiting for the game to keep going on.  You can grab the toy to put it away, with your dog beside you.  Put it away in the same place every time and reward your dog with a treat to indicate the game is over.  Giving lots of affection at this time is also a very way to reward your dog.

Remember tugging should only be done side to side, not in an up and down motion.  Side to side just ensures your dog won’t get a back injury.  Playing safe is key to playing successfully.

When deciding what type of tug toy to play with, make sure to look at a few key important characteristics to look for. You want to make sure that you use a tug toy that is long enough to keep your hand far enough away from your dog’s mouth to ensure you don’t get injured.

If you plan on playing with your dog, make sure that the toy is soft for your hand to hold the toy properly.  Using a hard or rough handle can make it hard to hold the toy once your dog starts pulling at it.

Pick one or 2 toys that are only meant as a tug toy.  If the toy is specifically just for this type of play, then when you pull it out to play, your dog will know right away what your are playing.  This toy is only a tug toy, not a fetch toy.

Rope tug toys are a super popular toy to use for playing tug.   They are soft on your dogs mouth and easy in your hand to hold on to.  Plus they come in varying lengths, thicknesses and styles.  These make a great choice as they even act as a type of floss for your dogs teeth.  Sort of 2 for 1.

When it comes too easy to hold tug toys that are a bit more durable than rope tugs, choosing “S” shape, “figure 8”, “infinity shape” rubber toys are an absolutely excellent choice.  They are easy to grab for you and your dog, plus your dog can actually bite down much harder with these types of toys.  There are many amazing choices to choose from in this line of tug toys like, KONG, Nerf, and West Paw just to name a few of the popular brands.

Sometimes we don’t always have the time to actually play tug with our dog, and having them play alone is a great way to still have them play without you.  Self tug toys come in a few different options, like :  Suction cup tug toys and tether tug poles.   There are a few variations of options when it comes to these types of toys, but the bottom line is they are a good option for playing with your dog.

Why do dogs like to play tug of war is a pretty easy answer, it is fun, good exercise and overall a fun time.  Always remember to follow the rules and play safe with your dog.  Never let the game get out of control and be patient. Why not shop now for your dog.  Start the tugging now!

I hope you enjoyed reading about dogs and their love of playing tug of war.  I would love to hear about your dogs favourite tug toy, so drop me a comment below.